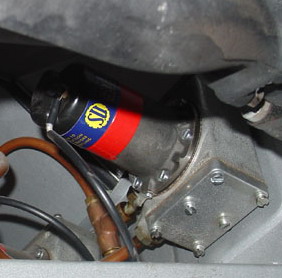 The early type SU fuel pump as fitted to British cars of the 1950s era used to give their owners many problems. It was not unusual to hit the fuel pump to get it started again. The points in the SU pump are designed to give a wiping action on each stroke, helping to clean the points. I was a mechanic working for an Austin-Healey dealer in Toronto Canada in the 1950s and one of the jobs that went with a regular tune-up and yearly service would be to replace the fuel pump points. If it was not done, inevitably the pump would stop.

The condenser (capacitor) was introduced to help stop the points from burning. When electricity jumps from one contact to an other it takes a small amount of metal with it, leaving a hole in one contact and a mountain of metal on the other contact (like distributor points). The condenser helped to slow down the build up of metal on the contact. The regular replacement on fuel pump points with a tune-up stopped, but 20-30,000 miles down the road the same old problem (it stopped).

The SU fuel pump has been replaced with many other types and makes of electric pumps, but the problem then is – they don’t fit – they make a lot of noise – they are always clicking – the pressure is too high – they still have the same problem, the points burn.

The 1970s was a big improvement within the regular looking SU fuel pump with the introduction of a diode. When the points open, electricity tries to travel across the points in the opposite direction, but when a diode is fitted it shorts out this reverse flow of electricity. There is now no arc of electricity across the points; the points don’t burn and pit anymore. If a British car with this type of pump stopped the problem is rarely the fuel pump.

The SU fuel pump is now supplied with this diode installed. You need to request positive (+), or negative (-). If you fit the wrong polarity pump you will damage the diode.

Positive-ground fuel pumps with a diode may not have a diode. What the major suppliers have been doing is removing the diode from a negative fuel pump and renaming it a positive ground pump. 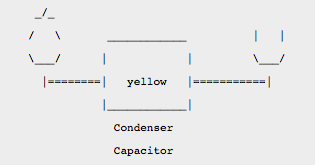 This pump now has taken a step back in time to the 1950s saying “It will be okay, it will last a long time.” Yes, but if you only drive say 2-3,000 miles a year, it should last about 2-3 years, well past any pump warranty. If you inspect your fuel pump to see if it has a diode, remove the black round plastic cover. Reference the diagrams to see if you have a condenser – diode – or nothing.

If you don’t have a diode, I would suggest fitting a correct SU diode to avoid any stopping and embarrassment.

If your pump has been on the car for many years, you should rebuild it completely or replace it with the new type SU with a diode!

Major repair kits are available – with diaphragm, points, gaskets, seals, diode, valves, spring, filter – giving you a great savings over purchasing a new pump. Complete set of instructions are included with each kit.

Here’s some information of vacuum advance which explains in detail how the unit operates. If you look at the original advance specifications for the BJ8, the mechanical advance of the distributor is 18º distributor. Add to that 8º vacuum advance equals 26º. Because the distributor turns at half engine speed you double this for crankshaft degrees, 52º and add the static advance of 10º and the total advance at 6400 rpm is a massive 62º. This is 2º more than one cylinder! Much too high and my only guess is that in 1966 it was important to improve the MPG.

The rev limit is 5200 rpm but even then its 58º total. The six cylinder engines are much better at 34 – 36º maximum plus 16º vacuum. You’ll also notice on the graph that the vacuum advance is constantly moving in response to speed, manifold depression and the amount of throttle.

… yes folks now you CAN service Lucas vacuum units so don’t throw them away.

It’s not too difficult to repair them and many of you will be able to do this with a few simple tools and a bit of time.

There is the coiled spring type connection to the points-plate and the lever type connection. With the level type, drill out the rivet and remove the lever, noting its original position. You’ll have to replace this rivet with a 3/32” one.

Roll back the folded edge of the housing. I use a pair of 5” long pincers, similar to nail removing pincers. One of the blades has been ground to a curved sharp edge and the other to a concave flat edge that suits the curve of the housing. By working around the edge 5 to 6 times the edge will be opened up enough to separate the housing and reveal the old diaphragm, hardened and split by petrol that finds its way there from the carby and down the vacuum pipe.

Remove the old diaphragm by drilling out the centre, save the retaining washer. This material is fabric reinforced neoprene and available from pump repair places of gasket makers. It is about .016” thick; (.4mm) cut two circles 2.46” dia. and with a leather punch a small hole in the centre for a retaining screw 1/8” or 4 BA. Drill and tap a hole in the control rod to take the screw and reassemble using a small amount of RTV silicone. Don’t forget the retaining washer.

Using a small amount of RTV silicone on the edges of the diaphragm, reassemble making sure the control rod is in its original position, and start bending the folded edge back into place with some pliers. Finally tap the edge down with a hammer and allow the silicone to set. – VOILA – a vacuum unit that now works.

On vacuum units most of you know what the numbers mean but I’ll repeat them for you. A 5.12.8 unit means the advance begins at 5” of mercury vacuum is complete at 12” of mercury vacuum and provides 8 degrees of distributor advance (that’s 16 degrees at the crankshaft).

Vacuum units for the BN1 is 7.18.12 for the BN2 5.17.10 and from the BN4 to the BJ8 5.12.8. Modified engines should be recalibrated using a vacuum gauge and test runs using light throttle at specific RPMs to optimize fuel economy and avoid early pinging. Using these figures you can try to find a vacuum unit that matches the modified engine or use one of the Hexagon head units and alter the spring rate and degrees of advance. A final coat of silver paint will improve the overall appearance.

If all this seems too hard then give you vacuum to Don Hardie or me and we’ll do it for a modest fee of $40. More on vacuums next month (will it ever end?)

An engine operating at 1500 rpm may be running under very light load with the throttle open only a small amount. This would be true if the car were being driven at a fixed speed on a level road. On the other hand, at the same speed, the engine may be under full load, as would be true if the car were being driven up a steep hill with the throttle wide open. In the first example, engine speed at 1500 rpm, engine under light load -the manifold vacuum would be high. This would operate the vacuum advance and the total spark advance would be the sum of the centrifugal advance plus the vacuum advance. In the second example, at the same engine speed but operating under full load, very little vacuum exists in the manifold. Because very little vacuum is available, the vacuum advance unit would return to its retarded position. Therefore, the total spark advance would depend on the operation of the centrifugal advance unit only.

Under any operating condition, the total spark advance is dependent upon the’ speed of the engine and on the load under which the engine operates. Thee higher the speed, the greater the advance, and also, the lighter the load, the greater the advance. At any speed, the load on the engine may vary from zero to full load depending on the position of the throttle plate. When the engine is operating at high speed, the throttle will be open which results in low manifold vacuum. Spark advance is controlled entirely by the centrifugal advance mechanism at this time.